Ahhh, that vintage year, 1980 in the UK. I had broken up from primary school in Derby and was looking forward to endless days of playing football and enjoying french fries from the restaurant down the road.

Being only ten at the time, I was never worried about the long hot days — there was just too much to do and look forward to.

The sounds of Blondie, David Bowie and Abba were the main hits as I proudly donned my Liverpool shirt, ready for another classic football game with my friends from my street.

When scoring goals was not on my mind, two police officers riding the California highway became my source of entertainment for Sunday’s as the theme tune to CHIPS boomed from my television set. These guys can really zip a corner as Ponch and Jon pursued the bad guys.

Cartoons were an absolute must as Saturdays saw Spider Man and the Fantastic Four save the earth once again. If only there were a time machine..

Bermuda almost saw its first swimming tragedy this year. Fernanda Varga almost drowned after 19 and a half hours of swimming. She was rescued by her swimming partner, Dr Shaun O’Connell. Despite her terrifying experience, she was determined to continue to swim in order to raise money for the Bermuda Physically Handicapped Association.

Emergency crews were called in as diesel oil from the cargo ship Hustler Cheyenne spread throughout the east end of Hamilton.

In the United States, the democratic party begins its four-day campaign at Madison Square Garden.

In Britain, Prime Minister, Margaret Thatcher visited the east end of London in the Harold Hill area to hand 12,000 council tenants keys to buy houses under the Goverments’ right to buy scheme. 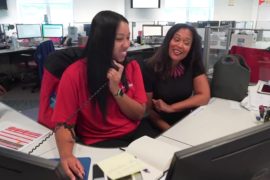