New boss at Bermuda Motors looks to the future

He’s come up through the ranks and now Krishna King is the general manager of Bermuda Motors —a position he took over last summer from Michael Butler who returned to Britain after 15 years.

“I have a good understanding of the industry and how it has evolved over the years. From the basic technology to what we see now with the hybrids and electric cars. I have seen the vast advancements and changes that have come along over the years,”said Mr King, who moved into the top job after being the after-sales manager for parts.

Speaking about the transition to becoming general manager, Mr King said: “We [Mr Butler and himself] were very close and he supported me a lot. It was a smooth transition and it was a big learning curve for me.”

But it was only natural for him to take over as general manager.

“I have been at Bermuda Motors for 26 years,”said the 49-year-old. “I was after-sales parts manager before taking over as general manager. I first came to the company as a part-time worker out of Bermuda College. The opportunity was there and I took it. I was always interested in cars —it is one of my passions—and I was fascinated with Toyotas.” 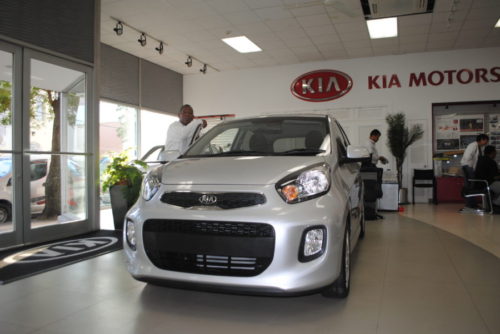 In fact he still sees the need for more Bermudians in the industry.

“It’s been a challenge for us to find Bermudians to go into the industry —I really don’t know why,” he said. “I can’t understand why we don’t have more Bermudians knocking on our doors. It is a challenge for me to get locals to want to come and work in various departments of the car industry. And everything is constantly changing now with the technology.

“We would like to get a commitment from Bermudians [to work in the industry]. We send people on courses constantly. In fact we just sent two people, one Bermudian and one guest worker, to the Kia training facility in Miami. Today you have to constantly keep up with the technology.”

It helps having been through the numerous departments at the company, said Mr King, adding that Kia is now their number one brand.

“I have been there and seen it and that helps —it is especially important moving forward,” he said. “We are constantly trying to improve and look after our customers so they get value for money. I have been in all the departments and know all sides of it. I have worked my way through them.”

And a car is especially important to Bermudians, he said.

“For the average Bermudian their car is their number one purchase because not everyone can afford a house. Their car is their first big purchase and we want to make sure we look after them all the way. Bermudians love their cars —they keep them very clean and take a lot of pride in them.”

Getting locals to buy into the new hybrid and electric cars will be a challenge, he said as some people don’t like change. “That is going to be a challenge for us —to get people to buy them and see the savings they will get.”

He has seen change over the years. “It used to be that all the cars were stick shift but that has changed. Nearly all of the cars we bring in now are automatics which are far better in our stop and start conditions. Now it will be hybrids and electric cars —we will be seeing more and more of them.

“That is just the way forward and with the price of fuel in Bermuda being so high is makes sense. Also with hybrids and electric cars it will reduce our (carbon) footprint. We live in this beautiful island in the Atlantic and we want to keep it that way.”

In the future drivers will see more electric stations and eco friendly vehicles.

Also the electric models are ideal for Bermuda. “We are not driving a lot of miles each day and it is perfect for us,” Mr King said. “You just plug the car in overnight —and depending how much you drive to work and back you won’t have to do that every night. Eco vehicles make sense for Bermuda in the future.”

Mr King has over the years gone on training courses to the Caribbean, Panama and also to Japan for Toyota. And it was while he was in Japan in the 1990s that he become aware of the philosophy of Kaizen —continuous improvement.

“The principle of Kaizen is you are constantly improving no matter if you are in manufacturing, supply or logistics,” he said. “It’s a philosophy. This business here is complex but you want to try and keep it as simple as possible. You are constantly asking yourself; ‘How we can improve our product and how can we can do things better’.”

Kaizen was originally introduced to the West by Masaaki Imai in his book Kaizen: The Key to Japan’s Competitive Successin 1986. Today Kaizen is recognised worldwide as an important pillar of an organisation’s long-term competitive strategy. Kaizen is continuous improvement that is based on certain guiding principles:

“I took that on board and we work with it internally with our staff to constantly improve,”Mr King said, adding that working as the after-sales manager for parts was a “very detailed”job.

“There are thousands of parts and you can’t keep every single part [in store],” he said. “It was a very challenging job —how do we get a person’s part in that is cost effective and minimises the inconvenience for the customer.

“We have a wide range of vehicles —everything from the Picanto [the highest selling car in Bermuda] to the high-end BMW. We try and cater to customers with different budgets. Some are single, some have families and they all want something different —a car which suits their taste. We want to look after everyone.”

Mr King himself drives a Kia, but his real love is fishing.

“I have a boat and I love fishing —especially deep sea fishing for wahoo and tuna,” he said. “I just love being out there. I have always loved being out on the water and I try to encourage teenagers to go out. Fishing kept me out of trouble when I was young and hopefully it can do the same with the kids today. I like to teach them about GPS and trawling —get them addicted to fishing!”

This article was featured in the May 2017, RG Motor Express Magazine, now RG Motor.