The rules and rewards of Crown and Anchor

Crown and Anchor is a beloved summertime tradition in Bermuda. With an estimated 2,000 patrons passing through the big white tent during the Cup Match holiday, the festive setup is home to 14 tables with various betting limits, and is always buzzing with excitement.

The rules of the game are simple; you find a space at a table – if you can – and put as much cash as you feel comfortable risking on one of six squares. The table operator will place a marker on top of your cash to lock in your bet and, once all bets are in, the often boisterous operator will shake a cup and lower it onto the table. Now here’s the best bit: the operator will lift his cup to reveal three dice which, after having danced around inside the cup, have now settled to elect one of six winners.

Each dice features a crown, an anchor, a spade, a heart, a diamond, and a club. You would have put your money on a square with one of those six symbols on it earlier. If one of the three dice matches the symbol you bet on, you’ve just doubled your money, and feel great. If two of the dice match, you’ve tripled your money and you are ecstatic. If all three of the dice match, well, you probably scream and kiss somebody!

The Crown and Anchor tent has been run by Funtyme Entertainment since 2011. Co-owner Craig Tyrell has described a few awesome twists that table operators throw in to crank the excitement up from time to time: “Occasionally a table may spice it up and roll two cups (six dice) or a special one dice that pays four times!”

Somerset supporter and avid Crown and Anchor player Vernika Symonds makes an important point when describing one of her favourite times from under the tent. “My best memory is walking away a winner instead of losing my daily gambling allowance.” It’s important to have an allowance, based on one’s disposable income, and to stick to it. No one should be leaving the tent wondering how they’re going to make it to their next paycheck.

Cavon Steede, another co-owner at Funtyme, recalled seeing a fan play and win thousands of dollars in a matter of minutes. It was the biggest payout he’d ever seen, with the player putting down $5,000 and doubling his money. “Probably the craziest thing I’ve seen at a table was a guy bet $1,000, and he tripled his money. He let the $4,000 ride [leaving it on the table to tempt fate for another round], and he tripled his money again, so he left with $16,000!” Mr Steede said. These instances most likely happened on a ‘High-roller’ table, but there are tables where beginners can learn the craft by risking no more than $2 per bet, so don’t let those potentially nerve-wracking stories scare you from giving it a try.

Suffice it to say, everyone has a Crown and Anchor story. It’s a wildly intoxicating game, full of drama, showmanship, and tremendous excitement. It’s a must do experience for anyone looking to enjoy the full flavour of Cup Match in Bermuda. And just like Mr Tyrell said: ‘You’ll never win if you don’t play.’ 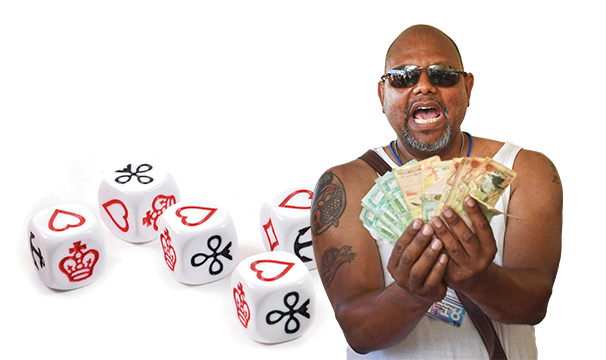